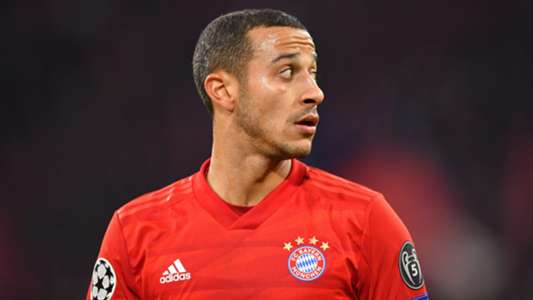 Bayern Munich chairman Karl-Heinz Rummenigge has confirmed Thiago will not sign a new contract and is expected to leave the club.

The midfielder joined the German giants from Barcelona in 2013 and has one year left on his current deal.

Thiago, 29, has recently been linked with a move to Premier League champions Liverpool, and Bayern have accepted that his departure is imminent after sporting director Hasan Salihamidzic’s failed attempts to convince him to sign an extension.

“Actually, the conversations Hasan had with him were always very productive. And at some point it actually seemed that [a deal would be reached]. But then Thiago informed Hasan that he would like to do something new again, and so it is,” Rummenigge told Sky Sport in Germany.

“We will have to accept that. We have a contract that is still valid for one year and if he agrees with any club and that club should pay a transfer of a certain amount.

“I don’t want to make any public comment about the amount that we have in mind. Then we will deal with it, but we will not, as I have already said, hold a summer sale.

“I’m not angry at all, I like him. I think he’s a great footballer, a fine footballer and he’s a good character too. And one shouldn’t forget either: At 29, he is at an age where, if he wants to do something new, he has to do it now because if you are in your 30s, it will be more difficult to make transfers.”

Rummenigge expects transfer fees to drop as clubs struggle to deal with the financial consequences of the coronavirus and feels the big clubs will suffer more than smaller ones.

“I think I have a very good network with many colleagues – regardless of whether it is Real Madrid, Barcelona, ​​many English clubs, France, Italy – and I can say very clearly: Everyone groans, everyone suffers. Everyone has reduced income,” he added.

“I can also say one thing: the bigger clubs have bigger revenue reductions than the smaller ones. Of course, that is in the nature of things, because of course the income is also a bit more questionable for all of us and we used to have higher income.”

Wawrinka To Kick Off Restart At Prague Challengers

Wawrinka To Kick Off Restart At Prague ChallengersAs players return to the court for the restart of the ATP Challenger Tour, one thing is...
Read more

7 Salmon RecipesAn array of salmon recipes that run the gamut from practical to aspirational. Whether you care for your fish grilled or broiled,...
Read more

Instant Pot Risotto – One-Pot Side Dish in Under 30 Minutes!

7 Salmon RecipesAn array of salmon recipes that run the gamut from practical to aspirational. Whether you care for your fish grilled or broiled,...
Read more

Instant Pot Risotto – One-Pot Side Dish in Under 30 Minutes!

6 tips you must follow to be forever ready to tackle fire damageFire damage is one of the most dangerous hazards that your house...
Read more