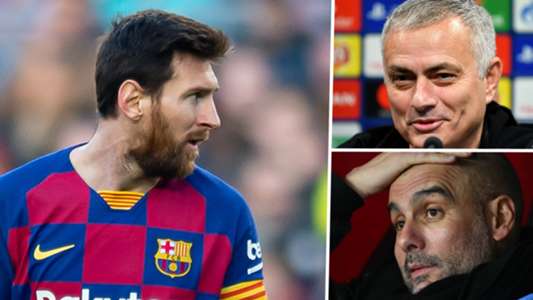 Jose Mourinho has taken a subtle swipe at Manchester City by insisting that Tottenham couldn’t have signed Lionel Messi because they “respect Financial Fair Play”.

Messi made headlines across the world last month after handing in a formal transfer request at Camp Nou at the end of a disastrous 2019-20 campaign.

The Argentine sought to activate the release clause in his contract which allows him to leave Barca on a free transfer at the end of any season, but the club blocked his departure with the support of La Liga.

The 33-year-old had been heavily linked with a move to Manchester City, but confirmed during a world exclusive interview with Goal last week that he has agreed to remain in Catalonia for at least one more year to avoid a drawn-out legal battle.

City are one of the few clubs in world football that have the financial muscle to pull off a deal for Messi, however they were hit with a two-season European ban at the start of the year due to an alleged breach of FFP regulations.

The Blues ultimately saw that punishment lifted by the Court of Arbitration for Sport (CAS) after an appeal in June, but a number of Premier League managers voiced their disapproval in the wake of the final verdict, including Mourinho.

“In the case, it’s a disgraceful decision because if City are not guilty of it then you are not punished with £10m,” said the Portuguese.

“If you’re not guilty you shouldn’t have a fine. If they are guilty the decision is also a disgrace and you should be banned from the competition.”

Mourinho couldn’t resist another aiming another dig at the Blues during a promotional video for Top Eleven, insisting that although Messi would make his final team, Spurs would not be willing to break any rules to try and bring him onto their books.

Asked if he would like to sign the Barca superstar, the 57-year-old told JOE: “For my Top Eleven team? No, not for Tottenham. Just for Top Eleven.

“He can only go to a team that doesn’t respect Financial Fair Play, so it’s not Tottenham, for sure.”

'Liverpool have had Mignolet back in goal' - Carragher criticises Alisson form The Brazilian is usually a commanding presence in the Reds goal -...
Read more
Sport

FC Goa’s Alberto Noguera: Moving to ISL is an upgrade

FC Goa's Alberto Noguera: Moving to ISL is an upgrade The former Atletico Madrid player was convinced about moving to India after he heard...
Read more

Ashe Is So Over It On New Single “Save Myself”: Stream

Ashe Is So Over It On New Single “Save Myself”: StreamIf you’ve been on Spotify, Netflix, or TikTok at any point within the last...
Read more

Win A Copy of Let’s Brunch