At the center, sporting a ludicrous propeller beanie, is Supreme Court Justice Ruth Bader Ginsburg. Her judicial robe, scandalously shredded, dangles from her neck and shoulders, revealing hints of underboob. Like Bernie, RBG is disconcertingly muscular. A black bikini string rises over her powerful flanks. The banal treble of indie music underscores this perplexing, hypnotic tableau. 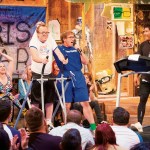 From a small video feed on-screen, New York–based comedian and artist Lorelei Ramirez speaks to a small internet audience. The bathers are in a Photoshop file titled DAMN-Recovered.psd that Ramirez is casually editing in real time. In a sidebar chatroom, viewers giddily send one another public text messages. They’re collaborating with Ramirez on the content of the drawing, sharing mental health tips, and extolling the healing powers of psilocybin mushrooms (someone calls them “God’s ibuprofen”). Writer Charlie Markbreiter—known in the chat as @charliedurian—acts as Ramirez’s off-camera cohost and moderator. Much to everyone’s delight, Markbreiter is typing out impromptu micro-fiction about skateboarding druids in a CVS pharmacy.

Twitch, which launched in 2011, is best known for livestreams of video games; some streamers earn significant money broadcasting feeds of themselves playing video games, and compete in sponsored gaming competitions, or esports. While some users watch streams of podcasters, comedians, and artists, the site’s core audience is males aged 18–34 who tune in by the millions to watch experts play battle royale or first-person shooter games like Fortnite and Overwatch.

Compared to the breakneck speed and graphic spectacle of a typical Twitch stream, “Art Is Easy” is like a mug of chamomile tea—albeit one sipped while huffing nitrous oxide. The vibe is calming and inclusive, yet gut-busting and blasphemous.

Ramirez clears their throat and unveils the trivia question: “Did you know that ninety-nine percent of ten makes up nearly fifty-five?”

A chyron text graphic appears on-screen, reiterating the obtuse question. Along the bottom of the viewing pane, a ticker scrolls repeatedly: THIS JUST IN: ALL POLITICIANS HAVE HUGE ASSES BECAUSE THEY SIT ALL DAY SIGN PAPERS [sic].

“Uh, it’s a yes or no question,” Ramirez clarifies while zooming the Photoshop window onto Justice Ginsburg. “If you could reply in the comments, let me know what you think the answer is and I will check back in. But in the meantime, we’re gonna color in our sexy little RBG.”

This pairing of cartoonish naivete with the irreverent debasement of #resistance liberal icon Ruth Bader Ginsburg encapsulates the twisted allure of Ramirez’s comedy. Whether doing stand-up, publishing zines, or producing slick professional video works, Ramirez weds trenchant social criticism with juvenile buffoonery. Though at times confounding, the comedian’s approach has transcended Brooklyn’s alternative and DIY rooms. In the last two years, Ramirez has written for HBO’s popular show “High Maintenance,” had a recurring role on the network’s “Los Espookys,” been profiled in the New York Times, and written, directed, and starred in the Adult Swim television “infomercial” called “Pervert Everything.” A true comedy obsessive, Ramirez continued appearing at indie nights until COVID-19 put in-person performance on hold. “Art Is Easy” was born of the restlessness of not being able to perform live.

With “Art Is Easy,” Ramirez has managed to adapt the outrageous experience of their live shows into something fresh and specific to Twitch. It’s an unlikely success, considering how flat some virtual pivots by artists and comedians have fallen. What sets “Art Is Easy” apart is its organic intimacy, the way that it easily achieves the “alone together” vibe that countless Zoom artist panels or Instagram Live comedy shows have aimed for and missed. And in the broader context of Twitch, “Art Is Easy” simmers subversively; a queer oddity nestled amid an often noxious, masculine commercial space.

Perhaps most important, “Art Is Easy” is devastatingly funny—even when tackling heavy material. Early in July, Ramirez welcomed comedians Francesca D’Uva and Edy Modica for an oddly timed chuckle-fest: D’Uva and Modica had recently lost a father and a stepfather, respectively, to COVID-19. They cracked jokes while processing grief, producing an afterlife-themed drawing of the departed (plus Frank Sinatra) titled All Dads Go 2 Heaven. (Merch with this and other “Art Is Easy” drawings can be purchased from Ramirez’s Teepublic store.) Later in July, comedian-artists Sarah Sherman and Katy Fishell joined the show alongside Theo Henderson, a homeless Los Angeles resident who hosts the podcast “We the Unhoused.” Together, the foursome, along with Markbreiter and the chat participants, drew an imagined park called Alpine where all are welcome and treated with dignity, regardless of housing status.

It is this warmth—the same welcoming atmosphere that Ramirez creates at their live productions—that keeps viewers coming back, even to a virtual space. For those feeling ever more atomized by perpetual quarantine-imposed isolation, or disempowered by the callous violence of the United States upon its most vulnerable, “Art Is Easy” does what great comedy should: it makes the audience feel less alone, united by cathartic howls against a system that is—while by no metric funny—increasingly laughable.

What Not to Miss at the 2020 New York Film Festival

Algorithms Can’t Automate BeautyYou feel the subtle effects of algorithms while using digital platforms: Spotify automatically plays another song based on what you already like;...
Read more

Leeds plotting £13.7m bid for target, some of their fans react: ‘Fantastic player’, ‘Get him’

Leeds plotting £13.7m bid for target, some of their fans react: 'Fantastic player', 'Get him' ...
Read more

Leeds plotting £13.7m bid for target, some of their fans react: ‘Fantastic player’, ‘Get him’

Leeds plotting £13.7m bid for target, some of their fans react: 'Fantastic player', 'Get him' ...
Read more

Koolhof’s US Open Shirt: ‘If We Win I’ll Think It’s The Best Shirt Ever Made’

Koolhof's US Open Shirt: 'If We Win I'll Think It's The Best Shirt Ever Made'Wesley Koolhof is one win away from lifting the biggest...
Read more