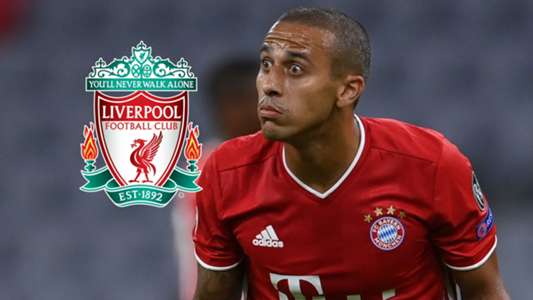 Liverpool need to sign Thiago Alcantara from Bayern Munich to help prevent a Premier League drop-off, according to Gary Neville.

Jurgen Klopp’s men ran away with the Premier League title in 2019-20, winning the league by an 18-point margin over runners-up Manchester City.

That triumph came one season after Klopp led Liverpool to the Champions League title, with the Reds cementing their status as one of Europe’s elite sides.

Liverpool have made just one addition in the off-season thus far: left-back Kostas Tsimikas, who joined in a £11.75m ($15m) deal from Olympiacos.

Neville believes that is not enough to avoid a regression in 2020-21 and has tipped Liverpool to move for Thiago, who has been heavily linked with a transfer to Anfield.

“To get to a Champions League final, win it the following season, and then to go again to win the Premier League title is a huge emotional drain on that group of Liverpool players for three years,” Neville said on Sky Sports.

“To ask them to go again and achieve that same standard would be a superhuman effort.

“It wouldn’t be ridiculous to suggest there will be a slight drop-off, if they don’t somehow stimulate that squad by doing something to give them that lift again.

“Thiago would be the big one. He is world class and would give them a world-class presence in an area of the field where they don’t have one.”

The 29-year-old has remained coy over his transfer plans as his contract with the Bundesliga champions enters its final season, though Bayern appear resigned to losing the Spain international.

Neville believes that the midfielder would be a needed addition to Jurgen Klopp’s side, which is likely to look very similar to last season but may be lacking a missing piece in midfield.

“Liverpool are not perfect. They have a world-class goalkeeper, centre-back and strikers,” Neville said. “They have really good midfield players with good work ethic but with Thiago would be another step. He would control the game with that weight of pass, that nous.”

Liverpool’s title defence begins on Saturday when they take on newly promoted Leeds United at Anfield.

Diamondback gears up for adventure with 8 different Haanjo models from commuter to carbonWhen it comes to gravel and adventure riding, for Diamondback, look...
Read more

How Words Cast Their Spell on a Poet

How Words Cast Their Spell on a PoetWhere Did Poetry Come From: Some Early Encounters by Geoffrey O’Brien (Marsh Hawk Press, 2020)Geoffrey O’Brien’s Where...
Read more

Mario Balotelli Adds 'Black Power' Tattoo to His FaceOn the pitch, the last couple of years have been a bit rough for...
Read more