Home Sport 'It will be nice to share a changing room with an alien'...
Sport 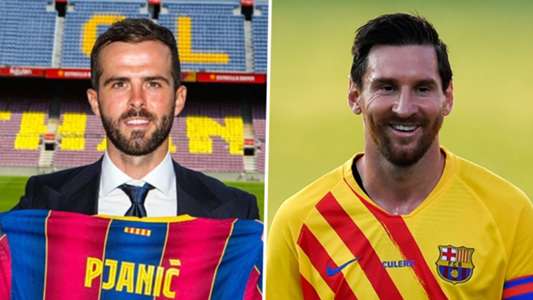 Miralem Pjanic itching to playing alongside Barcelona captain Lionel Messi, stating that “it will be nice to share a changing room with an alien”.

The Bosnian swapped Juventus for Camp Nou as part of a trade-off of sorts that saw Arthur Melo head in the other direction, with the swaps carried out – at least in part – in an effort to balance the respective books of each club.

It was a move that sparked the ire of Barcelona fans, with 30-year-old Pjanic effectively being traded off for a much younger Arthur, but Pjanic clearly cares little for the detractors as he prepares to line up next to “the greatest player of all time”.

“I’ve worked with some of the greatest players in the world. I’ve followed everything from the outside looking in but I couldn’t see Leo anywhere other than in Barcelona,” midfielder Pjanic said, referencing Messi’s recent admission that he wanted to leave Catalunya.

“He has done so much for this club and I always thought he would go out in style. There’s always dissatisfaction after a defeat (8-2 loss to Bayern Munich) but this is his home and I can only see him here. It would be strange to see him with another shirt.

“He looks happy – he’s the greatest player of all time. It will be nice to share the changing room with an alien.”

With Pjanic entering the latter stages of his career, he admits that he would have liked to have signed with Barca long ago, but made it clear that he will give everything to secure success for the club as they enter a new cycle.

“I would have liked to come to Barcelona when I was six years old if I could have! Since I was little it has been a dream to play here, playing for this club is extraordinary,” he said at his official unveiling as a Barca player on Tuesday afternoon.

“I’m very proud of what I’ve done, I’m at the biggest club in the world.

“When I entered the dressing room I felt the history and what this club aspires to. It’s a great opportunity to play with all these great champions.

“I hope I can lend a hand with my football. The boys can count on me in every aspect.”

After stimulus negotiations stalled Friday, the President detailed actions he would pursue if a deal isn’t reached

After stimulus negotiations stalled Friday, the President detailed actions he would pursue if a deal isn't reachedAt a hastily scheduled news conference at his...
Read more

35 Sensational Vegan and Cruelty Free TattoosWhen I went vegan almost seven years ago, the world was a very different place than...
Read more

'Bullied all game' - Some Celtic fans tear into 22-yr-old ace after the 1-1 draw vs Kilmarnock ...
Read more