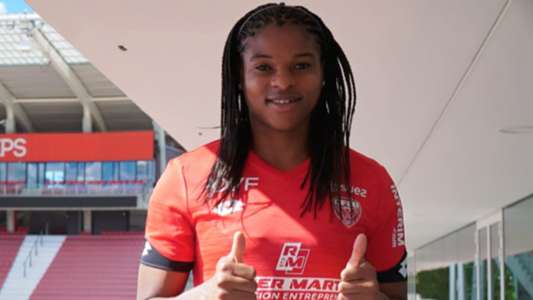 Desire Oparanozie has expressed joy over her winning return to the pitch with Dijon following a 2-1 triumph on her debut over Servette Chenois.

The Nigeria international joined the French outfit in June, having brought to an end her six-year journey with rivals Guingamp since arriving from Turkish side Atasehir Belediyespor in 2014.

The 26-year-old enjoyed a good spell, scoring 45 goals in 106 appearances, and was named captain for the 2019-20 season, leading them to a Cup semi-final before the Covid-19 outbreak.

Last season, she also scored six goals in 12 outings in all competitions, including a 40m stunner against Paris for Guingamp before teaming up with Dijon in June after the league cancellation.

With lockdown eased by the French government in June, Oparanozie and her new teammates resumed training and the Nigerian featured for 45 minutes in their first warm-up game on Wednesday.

And the former Super Falcons captain, who led the country to the Round of 16 for the first time since 1999, took to social media to share her excitement following her first game since March.

“First 45 minutes after five long months. Great feeling I’m back to doing my favourite thing,” she wrote on Twitter.

Lea Declercq netted the opener in the 35th minute to give Dijon a first-half lead before she grabbed the winner of the match five minutes after Rose Lavaud’s 75th-minute equaliser for Servette.

Oparanozie will be hoping to adapt to life quickly for the new season as Dijon open their campaign against ASJ Soyaux on September 5.

Before the league start, they will continue their build-up with a tie against Yzeure on Saturday and Reims at Phalsbourg on August 16 before Chimaka Nnadozie’s Paris at Beaune six days later.

Kevin Costner’s New App for Road Trips Tells You About the Places You Travel ThroughIf you went on vacation this summer, chances are you...
Read more

8 Super Stylish Ways to Deal with that Awkward Spot at the Foot of the Bed Don't miss the chance to do more with this...
Read more