Home Sport 'I closed all the other doors' - Tonali on why he had...
Sport 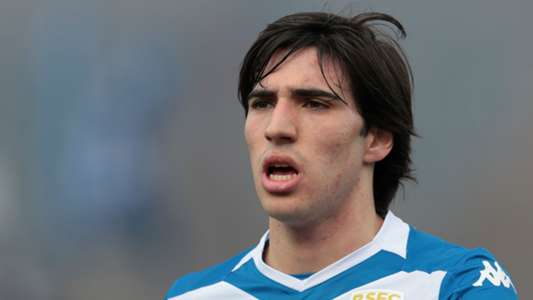 Sandro Tonali says he “closed all other doors” when his childhood team AC Milan made it clear they wanted to sign him.

Milan announced the signing of the Italy international on loan with an option to buy for a reported €35 million (£32m/$41m) last week after three impressive seasons with Brescia.

Tonali, compared to Italian great Andrea Pirlo, had been tipped to join city rivals Inter, but he says the opportunity to join the Rossoneri was too good to turn down.

“More or less everyone supports Milan where I’m from, including my father, who passed that passion onto me as a kid,” he told a media conference.

“I’ve wanted to wear this jersey for a while. I didn’t speak much to Massimo Cellino [Brescia president], but he realised straight away what it meant to me. He said he’d let me make my choice and he kept his word.

“I asked him to make this effort for me and he was super about it. When I realised there was this opportunity to join Milan, I closed all the other doors. I had to go to Milan. I had to.

“My agent did most of the negotiating with Inter, so he quite rightly left me out of it so I wouldn’t get distracted. As soon as I heard about Milan, and he knew that I supported them, we talked and I let him get to work.”

A first taste of Rossonero action for our latest arrivals

A technically gifted midfielder renowned for his dribbling and passing abilities, Tonali scored once and registered seven assists for Brescia as they were relegated from Serie A in 2019-20.

He could make his debut in Thursday’s Europa League qualifying clash against Shamrock Rovers, potentially lining up alongside one of his idols, Zlatan Ibrahimovic.

“We can’t wait, we want to just go out there and play,” he added. “It’s a very high level of quality in this squad and all the team-mates – starting with Ibrahimovic – pass on that desire to win. We want to prove on the pitch what we can do.

“Ibra is another idol, someone I already admired the first time he played for Milan. He manages to just put the team on his shoulders and carry them to victory. He’s a man to be taken as an example.”

Inked Girl of the Week: Lextscy

Inked Girl of the Week: LextscyThis week's Inked Girl is the lovely and luscious Lextscy. This tattooed babe is blonde and beautiful,...
Read more

Inked Girl of the Week: Lextscy

Inked Girl of the Week: LextscyThis week's Inked Girl is the lovely and luscious Lextscy. This tattooed babe is blonde and beautiful,...
Read more

SPONSORED POST: 3 Budget-Friendly Ideas for Setting Up Your Study-from-Home Space

SPONSORED POST: 3 Budget-Friendly Ideas for Setting Up Your Study-from-Home SpaceWith the back-to-school season looking a lot different this year, you’re not alone if...
Read more

Former President Clinton calls Ginsburg 'one of the most extraordinary justices ever to serve'Supreme Court Justice Ruth Bader Ginsburg was remembered at an online...
Read more

The Timeless + Sustainable No Season Bag Collection From Maria/Maleta