For the past decade, Vogue covers have followed an overall formula: dress up a celebrity or model in flowing designer fashion, arrange them into an angular pose, and then center their face on the magazine for maximum newsstand visibility. The results look like so many repetitive royal portraits in a museum wing. But for this year’s September issue, always the year’s biggest, the magazine worked with two painters to create a pair of covers. Kerry James Marshall’s imagined model wears an asymmetrical Off-White evening dress while Jordan Casteel’s portrait of Aurora James presents the designer on a Brooklyn rooftop in an avalanche of blue silk. Both paintings are remarkable in and of themselves, but they stand out even more against that staid photographic cover formula. They’re textured, evocative, and exciting, turning the magazine into a collectible art object. 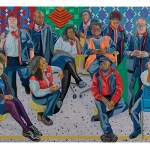 On top of everything else, the pandemic has caused an identity crisis for glossy magazines. Quarantine made the usual high-production photo shoots all but impossible. Some publications adapted by safely social-distancing using drones or telephoto lenses. For a New York Times profile of Larry David, photographer Jake Michaels shot the comedian through a window. In April, Sports Illustrated, usually covered by a portrait, ran an image of empty stadium seats instead. The best solution that has emerged might predate photography, however: use another kind of artist. Besides Vogue, Rolling Stone commissioned a portrait of Greta Thunberg from Shephard Fairey for its April issue and Vanity Fair asked Amy Sherald to depict Breonna Taylor, the Black woman who was killed by police in March for its September issue. The New Yorker, which has always used illustrations rather than photographs as covers, recently ran its first cover by the painter Grace Lynne Haynes, a portrait of the Black activist Sojourner Truth.

In an eerily prophetic move, Italian Vogue replaced all of the photography for its January 2020 issue with illustrations, including work by artists like David Salle and Vanessa Beecroft. It was meant as a provocation about sustainability—no one had to travel, and thus damage the environment, to produce the imagery. But soon enough, no one could travel even if they wanted to. In this case, difficulty has bred editorial innovation. Casteel’s Vogue portrait of Aurora James, crisply realist, is an eloquent testament to both fashion and art as well as their creators: one Black woman depicting another. Who needs photos?

Magazine covers have had an uncertain fate since the rise of Instagram in the 2010s. On social media, celebrities can debut photos of themselves directly to audiences of millions. Given their ubiquity online, such high-production-value images became disconnected from any kind of print product. Fashion magazines even began releasing “digital covers” to create buzz around particular stories, retrofitting an analog idea for the digital stream.

Covers were once predicated on scarcity. If their role was previously to present a single iconic image to serve as a representation of the moment, grabbing eyes and netting newsstand sales, then the Internet provides a hundred such iconic images a day. What’s more, the most popular are usually unplanned or user-generated in the form of viral memes or video footage, raw documents of breaking news. The most indelible image of Breonna Taylor still isn’t the painting on the Vanity Fair cover, but a selfie she took in bright sunlight, her hair swept into a whirl and a gentle smile on her face. No artist or photographer was involved; it’s a self-portrait. (The selfie was turned into a cover for the September issue of Oprah magazine by the artist Alexis Franklin.)

The artist cover might be a response to this digital deluge, given a further boost by the difficulty of photoshoots in the pandemic. We already consume more photography than we can digest; we non-artists take and publish photographs ourselves multiple times a day. The kinds of cosmetic manipulation and idealization that Vogue trafficked in for its covers are now commonplace with do-it-yourself apps and filters. Photos have less novelty than ever. But the original work of art commissioned specially for a magazine issue, a unique image that wouldn’t have existed any other way, is more of a novelty. Even though it’s reproduced across millions of magazine copies, it still maintains more of an aura than yet another photo.

The drama of a big-budget photo shoot with props and costume changes gives way to the quieter event of collaborating with a single, celebrated creative voice. A magazine partakes of an artist’s cultural cache and their visual fluency—who better to create an iconic image?—while the artist reaches a much larger public audience in print and online than a gallery or museum usually affords. Marshall’s Vogue cover is probably the most exposure his work has seen since Sean “Diddy” Combs bought his canvas “Past Times” in 2018 for $21 million.

Our algorithmic feed-addicted culture is always pursuing a sense of lost authenticity. At this moment, art feels more authentic than photography; it breaks through some of the Internet’s visual noise and still drives the kind of headlines that benefit magazine sales, as major photoshoots once did. Sherald’s name, famous since the debut of her Michelle Obama portrait, is on the cover of Vanity Fair as well—the artist herself is newsworthy.

Sherald, Fairey, and Marshall share, to different extents, recognizable styles that a mainstream reader might recognize just from seeing the cover. It’s not just any artist who can provide a successful cover for a huge media corporation; there’s an aspect of brand recognition that makes the change an easier sell to both editors and readers. Condé Nast is burnishing its credibility as a cultural ally while shaking up its aesthetic.

It’s not a coincidence that many of the artists chosen for the covers are Black; the trend must be seen in the context of the Black Lives Matter uprising. While these collaborations are more specific and successful than commercial brands making bland support statements of activism, luxury magazines have failed both Black creators and readers in the past. Vogue only had its first Black cover photographer in 2018, with Tyler Mitchell’s portrait of Beyonce. This August, the magazine was also criticized for Annie Leibovitz’s portrait of Simone Biles, which used some unfortunate lighting that washed out the gymnast’s skin. The magazine publisher is in the midst of a larger reckoning, one that stretches from the exodus of Bon Appetit’s former editor-in-chief Adam Rapoport to widespread critiques of creative director Anna Wintour, including from her former Vogue ally Andre Leon Talley.

Wintour has pledged to diversify her talent pool, which the artist covers accomplish doubly, both in creator and medium. It’s one pandemic trend that could happily stick around.

Transgender Metalhead Satanist Wins Republican Nomination for County SheriffWait until Fox News gets a load of this: A transgender metalhead satanist has won the...
Read more