Researchers at the University of Antwerp and the National Gallery of Art in Washington, D.C., have released a study supporting the restoration last year of the Ghent Altarpiece (1432) by Northern Renaissance painter Jan van Eyck. Critics of the restoration had called attention to work done on a central panel of the work depicting the “Adoration of the Mystic Lamb.”

Last year’s restoration effort left the lamb depicted in the work with new, human-like facial features, including what seemed to be new pairs of eyes and lips. The updated lamb shocked some in the art world at the time of its unveiling, but a new paper published in the peer-reviewed journal Science Advances asserts that the restoration of its appearance is consistent with its original 15th-century depiction. 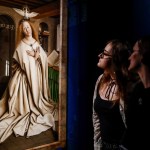 The study revealed that the lamb had been restored on various occasions since the work’s creation. “During the recent conservation treatment that was completed in 2019, conservators were able to safely remove the 16th century overpaint that completely obscured the head and patches of the body in the Lamb of God,” the paper reads. “The head of the Lamb that emerged has many of the facial features that previously could be elucidated from analysis of the chemical imaging data.”

The paper also suggests that a combination of infrared imaging spectroscopy and macro X-ray fluorescence “expands our possibilities for resolving complex conservation and art historical issues.”

“Combined with the conservators’ thorough optical examination informed by years of experience and insights derived from paint cross sections,” the paper states, “chemical imaging methods will no doubt be central to furthering interdisciplinary research and contributing to resolving art historical and theological issues on the Ghent Altarpiece and other works of art.”

The Monumental and Human Poetry of Paul Valéry

‘Arsenal need Ozil, Sokratis and Mustafi out the door’ – Ex-Gunner Nicholas says ‘defence is key to the rebuild’

Win A Copy of Berries

Win A Copy of Berries Fill in the giveaway information, and you’ll be entered to win a copy of Berries: Sweet & Savory Recipes by...
Read more