Bill Arnett, Collector with a Passion for Supporting Black Art of the American South, Is Dead at 81

Bill Arnett, Collector with a Passion for Supporting Black Art of the American South, Is Dead at 81

Bill Arnett, a collector who since the mid-1980s has avidly purchased work by Black artists based in the American South, died on August 12. He was 81.

Arnett’s unerring passion for what he called vernacular art—work created by largely self-taught artists who were almost entirely ignored by major museums in the United States—helped push to the fore artists such as Lonnie Holley, the Gee’s Bend quilters, Ronald Lockett, Mose Tolliver, and, most notably, Thornton Dial.

Some 450 of these works formed the basis for the groundbreaking exhibition “Souls Grown Deep: African-American Vernacular Art of the South,” which was staged in 1996 at the Carlos Museum at Emory University in Atlanta. In 2010, Arnett established the Souls Grown Deep Foundation, as a way to manage his vast art collection, and it has since placed hundreds of works from it with museums across the U.S. In a statement, Maxwell L. Anderson, the president of Souls Grown Deep, praised Arnett for his “keen eye and great generosity as a collector.” 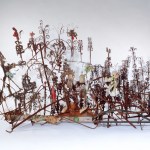 The artists represented in Arnett’s holdings have been called folk artists, vernacular artists, self-taught artists, or outsider artists, terms which are now seen as outmoded because of their negative connotations. Arnett argued that their work was just as good, if not better, than the contemporary art that populated the country’s biggest museums. Music by Black Southerners, he often claimed, had been widely heard and understood by people of all races living far beyond the region. But that hadn’t been the case for visual arts, because the art world was so small, he said.

His goal, he once told the New Yorker for a 2013 profile, was to amass a collection that acted as a guide to “the most important cultural phenomenon that ever took place in the United States of America.” He housed his holdings, which included hundreds of works by the end of his life, in an Atlanta warehouse.

Arnett’s longest and most sustained collaboration was with Dial, who died in 2016 and was known for crafting paintings, sculptures, and works on paper from reused materials that were torn and distressed. The two first met in 1987, and their friendship lasted until the end of the artist’s death.

Dial’s work is now considered essential, and it has appeared in major shows at the Metropolitan Museum of Art, the Museum of Fine Arts Houston, and the Studio Museum in Harlem, as well as one edition of the Whitney Biennial. But his work was not always so famous, and much of the reason it came into view at all was because of Arnett, who helped fund the creation of Dial’s art in exchange for the right of first refusal. Thanks in part to Arnett’s collecting, Dial rose to fame in the ’90s.

Arnett’s method of supporting Dial was one that he also extended to other artists. He gave them a weekly standard allowance and encouraged them to raise the prices for their art, which, in turn, helped inflate their markets. If Arnett wanted to buy one of their pieces, he would agree to pay that increased price.

Some viewed this approach as an important way to support artists. Art historian Robert Hobbs once wrote, “His primary goals were to remove the economic and social stresses from the artists’ lives so that they could reach their full potential, to acquire a critical mass of work from each individual in order to help establish each one’s merit, and to support the claim that this work constitutes an extremely important twentieth-century artistic development.”

Controversy and suspicion often followed Arnett’s work, however, with many alleging that Arnett was exploiting Black artists’ labor and using it to raise the profile of his collecting. Susan Krane, who was working as a curator at Atlanta’s High Museum of Art when she became acquainted with Arnett, told the New Yorker, “If you’re a museum person, it raised every red flag you’re taught to pay attention to.”

The allegations that Arnett’s collecting belied unsavory intentions reached their apex in 1993, when 60 Minutes aired a segment focused on Dial. The news program framed Arnett as someone who had manipulated Dial such that his work was now capitalized and made market-ready. “Now it seems that purity has been lost,” the report claimed.

After the report aired, exhibitions devoted to artists associated with Arnett were called off. Years later, in the 2000s, quilters from Gee’s Bend—whose work Arnett once claimed shared affinities with art by Paul Klee and other European modernists—filed lawsuits against the collector, alleging that he hadn’t sufficiently paid them. Ultimately, the suits were settled out of court. Arnett told the New Yorker that the Gee’s Bend legal actions represented attempts to “discredit” him. And in 2017, Dial’s family sued Arnett, alleging that he donated a Dial work to the High Museum that he didn’t rightfully own. (A little over two weeks later, the suit was withdrawn.)

A Washington Post profile from 2017 called the claims made in the 60 Minutes segment “unfounded,” given that Arnett had reportedly not gotten all that rich from the artists he supported. Arnett addressed them directly, saying, “I’m watching a handful of nobodies, little scumbags, motivated by nothing more than greed and their own shortcomings, trying to destroy the most important thing there was.”

William Arenowitch was born in 1939 in Columbus, Georgia. His father owned a dry-goods company and later supported his early ventures in art dealing. In college, Arnett took classes on ancient civilizations, which instilled in him an interest in art history—and a general sense of curiosity overall. After graduating, he traveled Europe, and in 1964, he settled in Atlanta after joining the Air Force.

Arnett’s first forays into collecting came during the 1970s, after traveling with his wife, Judy, to Asia, where he bought Hittite pottery and Chinese porcelain and jade. Soon, he expanded his collecting to include African art, and he began writing scholarship about these works for institutions such as the High Museum.

In the final decade of his life, Arnett became best known for the Souls Grown Deep Foundation. The foundation has accrued a loyal following, both within the art world and beyond it. (The actress Jane Fonda, who is currently one of the foundation’s trustees, once donated $1 million to Tinwood Books to underwrite the production of Souls Grown Deep publications.) Through Souls Grown Deep, various major U.S. museums have had their collections significantly augmented by donations from the foundation, most notably the Met, which received 57 works from it in 2014. In 2012, Souls Grown Deep donated its archive to the University of North Carolina in Chapel Hill.

“The Foundation has augmented its mission and vision in the wake of the Arnett family’s involvement, embarking on two new objectives: Transferring artworks to the permanent collections of leading museums to bolster the reputations of individual artists, and working to redress the social and economic inequities that continue to face the communities that gave rise to this art,” Maxwell Anderson said in his statement. “Progress on both fronts will serve as a lasting tribute to Bill’s decades-long aspirations.”

Arnett often claimed that all this work was to help cement the legacy of artists who were unlikely to have had their work in museums without him. “I consider myself an expert on the visual arts of the African-American South along with the cultural politics of the region,” he told the New Yorker. “It is my nervous and trembling, but history-based and always optimistic, prediction that great culture will outlast corrupt bureaucrats and their heavy-handed abuses of power, and the greed-driven, callous, and destructive tactics of bloodless profiteers.”

The Justice Department asked to take over the defense of Trump in a defamation suit filed against him by a woman who has accused...

The Justice Department asked to take over the defense of Trump in a defamation suit filed against him by a woman who has accused...
Read more

Best Seat In The House With Viewsonic

Best Seat In The House With ViewsonicTechnology Tips from ViewSonic for Work and PlayIn today’s new world of social distancing and remote work, daily...
Read more