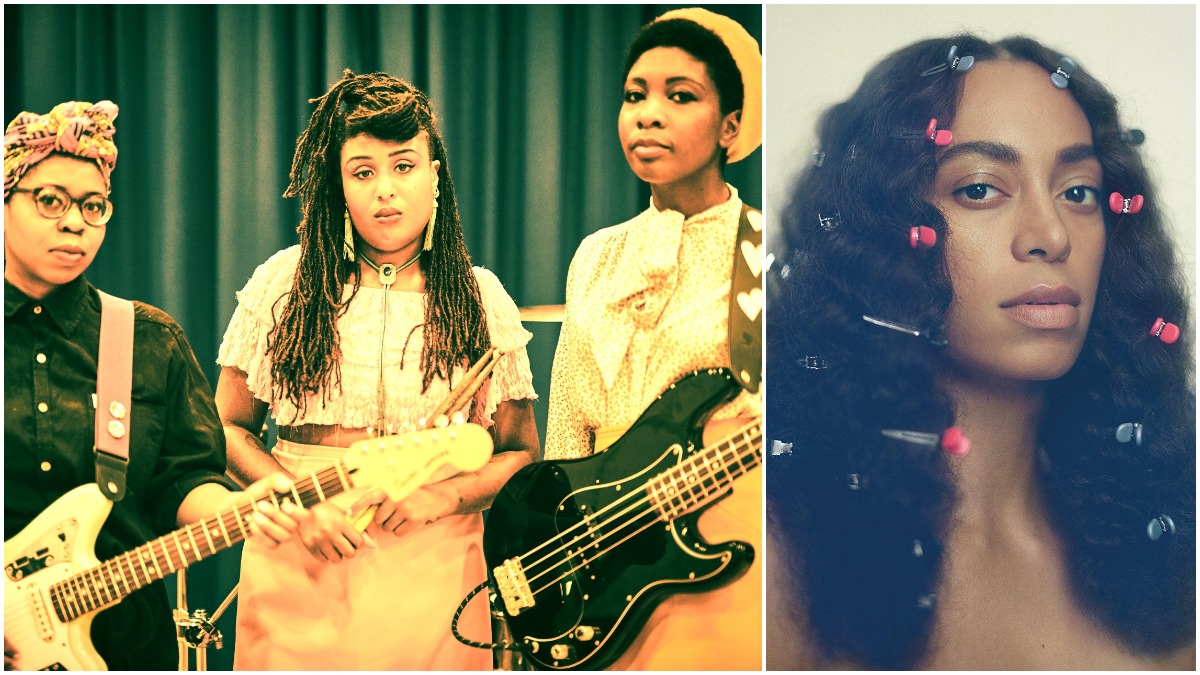 The London post-punk band Big Joanie have shared a thumping cover of Solange’s “Cranes In The Sky”. The track is one-half of a 7-inch that they’re putting out next week through Jack White’s Third Man Records.

“Cranes in the Sky” is a track from Solange’s clean and crisp 2016 record A Seat at the Table, and Big Joanie flip it into a crunchy, bass-driven, downright noisy version that’s truly amazing. The band translate the beautiful harmonies into their Ronnettes-esque proto-punk delivery and then rip a two-minute solo during its final third that breathes a whole new life into the song while also maintaining the integrity of the original. Listen to both versions below.

Today’s cover is the first new material that we’ve heard from the Black feminist trio since its 2018 debut full-length, Sistahs, which was released via Thurston Moore’s publishing company Ecstatic Peace Library. Since then, Big Joanie have toured with Sleater-Kinney and Parquet Courts and have opened for the likes of Bikini Kill and The Raincoats, so it’s no wonder that they caught the ear of White and his label.

Out August 14th via Third Man, the “Cranes in the Sky” 7-inch will be backed by an original tune called “It’s You”. A press release indicates that Big Joanie’s next record will be put out by Kill Rock Stars, so this deal with Third Man Records isn’t a permanent arrangement.

To celebrate the release of the 7-inch, Big Joanie are playing a masks-required, socially distanced live show at the Ecstatic Peace Library Record store in London. The gig goes down on August 15th and tickets are free but extremely limited. The event will also have a donation bar, with all the proceeds going toward Girls Rock London and Decolonise Fest.

Bagpipers From All Over The World Team Up For Awesome "The Final Countdown" CoverIs there such a thing as too many bagpipes? Absolutely not!...
Read more
Music

Dr. Martens' Iconic Boots Are On Sale Right NowTime really does fly when you spend months cooped up at home. Fall will be here...
Read more

Art done by Antonina Rostra at Black Anchor Worldwide in Los Angeles, CAWe played around with placement a lot when i got there. The...
Read more