At 51⅛ inches by 38 inches, the work features one of Picasso’s three muses, the Surrealist photographer and artist Dora Maar, whom he met in 1936. The Christie’s sale marks its first time at auction.

The piece is a seminal example of Picassos’ wartime artistic developments, according to a statement from Conor Jordan, Christie’s deputy chairman of Impressionist and modern art. Completed in 1941 following the Nazi regime’s occupation in Paris, it is from a series of works featuring Maar Picasso made in his Paris studio as the events of World War II unfolded across Europe and elsewhere. 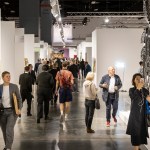 Picasso’s portraits featuring Maar are among his most prized paintings. She famously inspired his “Weeping Woman” series, and the artist once said, “For years I painted her in tortured forms.” Works depicting Maar now command some of Picasso’s highest prices. His seated portrait titled Dora Maar au chat (1941) sold for $95.2 million at Sotheby’s in May 2006. More recently, Buste de femme (Femme à la résille), from 1938, sold for $67.4 million at Christie’s in May 2015.

“By turns anguished and lyrical, aggressive and despondent, the works all share an urgency, making them as much expressions of Picasso’s state of mind as portraits of Dora,” Jordan said of the series. “Sequestered in the cool light and pressing angles of the attic space, Dora is depicted on a grand scale as proud and unbending, an image of stately defiance, a modern Marianne.”

Comparable examples of Maar in similar dress from the 1940s series reside at the Musée Picasso in Paris, the Kunstmuseum Basel in Switzerland, and the Neue Pinakothek in Munich. A skilled artist in her own right, Maar found early success with her photography in Paris during the 1930s. She also documented Picasso’s month-long creation of his seminal work Guernica (1937), as well as the present work coming up for sale. Christie’s statement on the work notes Maar’s essential role in Picasso’s practice describes her as “an active participant in their intense artistic dialogue.” Long overshadowed by her relationship with Picasso, Maar’s work is now seeing critical attention, with a first a major traveling retrospective that first opened at the Centre Pompidou last year.

The painting carries a guarantee and comes to auction from a Swiss collection. According to the work’s provenance record, an early owner was New York modern art dealer Stephen Hahn, who had it in 1967. Hahn was the subject of two separate lawsuits involving sales of Nazi-looted art. In both suits, Hahn maintained that the works were bought in good faith. The first suit came about over Hahn’s 1975 sale of Picasso’s 1922 painting Femme en Blanc to Chicago collector Marilynn Alsdorf. In 2004, during a restitution case, the work—then valued at $10 million— was seized from Alsdorf. The next year, Alsdorf settled the lawsuit for $6.5 million.

And in 1976, Hahn sold Pissarro’s 1897 painting Rue de Saint Honore Apres Midi, Effet de Pluie to the Baron Hans Heinrich Thyssen for $275,000, founder of Madrid’s Thyssen-Bornemisza’s museum. In 2017, the 9th U.S. Circuit Court of Appeals decided the heirs of the original German-Jewish owner Lilly Neurbauer-Cassirer could sue the museum for the return of Pissarro, which was sold under duress during WWII; this year, a court in California ruled that the institution could continue holding on to the work.

After Hahn, the work was owned by Mexican-born modern art collector Placido Arango, who served as a trustee of New York’s Metropolitan Museum of Art. Arango acquired the work from Basel’s Galerie Beyeler. The work also carries an impressive international exhibition history. Between 1945 and 2002, it was featured at a landmark Picasso retrospective that traveled to the Victoria and Albert Musuem in London, the Stedelijk Museum in Amsterdam, the Palais des Beaux-Arts in Brussels, and the Kunstmuseum Bern in Switzerland, among others. It was last shown in the U.S. at the Dallas Museum of Arts, at the artist’s retrospective in 1967.

Facebook
Twitter
Pinterest
WhatsApp
Previous articleInterview: Artist Mohamad Hafez Explores How Multiple Identities Inform His Art and Why He Invests in Education
Next articleFIAC Cancels Fair One Month Ahead of Planned Event as Covid-19 Numbers Rise in France

Harlem’s Fashion Row Designers Created the Coolest Kids CollectionJanie and Jack rolls out very cute wares for the small set seasonally. But its most...
Read more